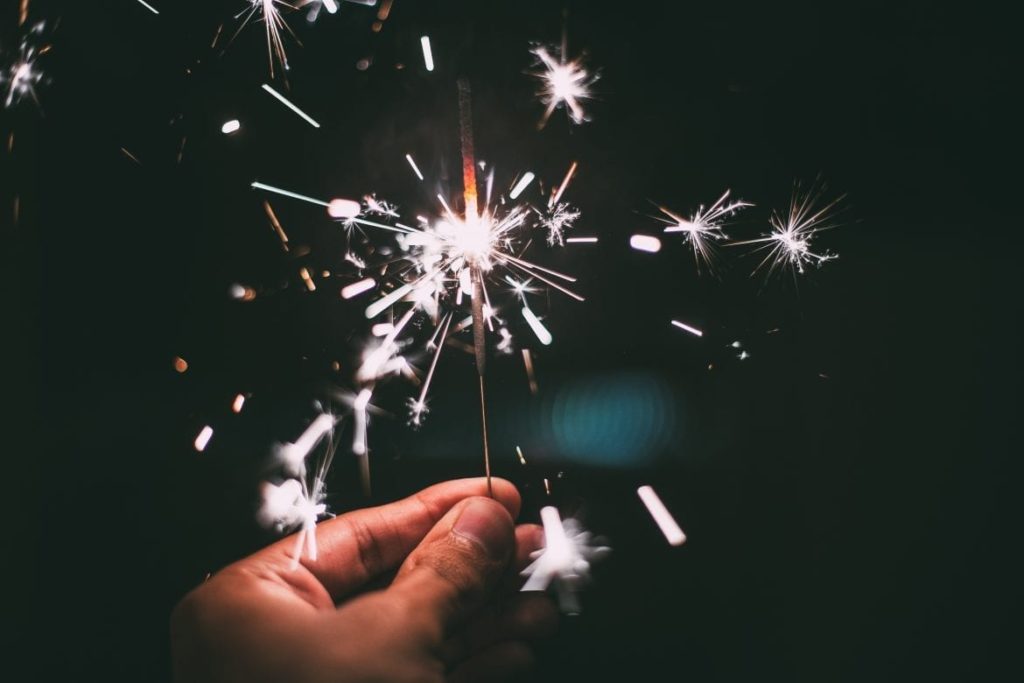 The fourth and final key enabler focuses on “Organisational Integrity”, identified by the Engage for Success to improve employee engagement levels in the UK and defined as that happy state of affairs where “…the values on the wall are reflected in day-to-day behaviours. There is no ‘say – do’ gap”. In this article, we explore what it means, give it a Colour Works spin, and suggest ways in which you and your organisation can bring it to life for everyone’s benefit.

We’ve all seen them – the Values posters – blu-tacked to office walls beside photos of the Christmas party and requests for bric-a-brac for the jumble sale in the canteen. Sometimes, they’re laminated to add gravitas and a sense of permanence, and it’s a cast-iron certainty there’s a framed copy in the MD’s office.

“Gentlemen, these are my principles. If you don’t like them, I have others.”

A jaded view, of course, but it’s fair to ask, is there really any point in having these Corporate Commandments writ large on company walls and websites? At first glance, they all seem to say the same thing anyway…”outstanding quality”…” respect for our people”…”passionate about customers”…”whatever it takes to make a fast buck and retire to the Bahamas”. Well, maybe not that last one, but judging by the way some companies are run, it sometimes feels like it belongs up there more than some of the other values.

And it’s this gap between what’s said and what’s done that concerns us here. The fourth part of our ‘Engage or Die!’ series focuses on organisational integrity, which the Engage for Success taskforce defined as that happy state of affairs where “…the values on the wall are reflected in day-to-day behaviours. There is no ‘say – do’ gap”.

So, it’s not the values on the walls that are the issue, then. It’s how the boss is behaving, day in and day out, and the people in sales and on the trading floor, call centre staff, IT, the nurses on the wards and the teachers in the classrooms – rather everyone, in fact, who clocks in for work on a Monday morning.

Which makes it a pretty tall order if you’re an MD, CEO or leader of any kind at all, because not only are you responsible for your own behaviour, you’re also, in many ways, responsible for the behaviour of everyone who sees you as a leader. Make no mistake, when we’re talking about integrity and setting the moral compass of the business, it’s the people at the top who set the course, and it’s through their actions that we find out whether their walk matches their talk.

Sam Walton, founder of Wal-Mart, said “We let folks know we’re interested in them and that they’re vital to us, ’cause they are”. And how did he prove his point?

When a man who behaves like that tells you he’s interested in you and values you, you know he means it. And when he tells you he wants you to treat your staff and customers the same way, you know he means it. There’s a clarity of message here that every employee will understand. And when it’s backed up by behaviour that’s consistent with that message, and that chimes with the values of those employees, then there’s little doubt that the culture and practices of the organisation will also be consistent with that message.

When the talk of a leader – at any level – is NOT matched by their walk, then employees inevitably start to look for signs of what really does matter. Here’s a quote from a leading UK insurance company’s website:

“We make sure that we respond to and resolve customer complaints quickly and fairly. And we’re happy to show you how we do this. See the table below for more information.“

And here’s what the Financial Conduct Authority said recently, after fining them £30m for mis-selling and poor complaint handling:

They  “…promise to provide customers with peace of mind when things go wrong. In fact, the firm’s culture, controls and remuneration structures meant that staff were focused on quantity, not quality, and there were customers that paid the price for that.” Management “put pressure on staff to close as many complaints as possible, meaning there was a risk that grievances weren’t handled fairly and customers didn’t receive appropriate redress.”

Do we assume that the management team cynically and blatantly created this kind of culture? Perhaps they did. Certainly, the financial rewards of mis-selling can be a powerful draw. More often than not, though, businesses fall foul of much more benign forces – a kind of ‘everyday‘ lack of organisational integrity that has a gradual and debilitating effect on a business and the people within it.

People see the disconnect between the talk and walk of their leaders and don’t know who and what to trust. The danger then, of course, is that they make their own decisions about what’s important, and where the company’s and their own priorities lie. Silos spring up, collaboration becomes difficult, and an ‘each to their own’ mentality takes hold. Perfectly good visions, strategies and objectives become suspect, undermined or ignored altogether, dismissed as nothing more than trite ‘company-speak’, or smoke and mirrors concealing the ‘real’ motive.

Many companies we work with are surprised and frustrated when they encounter this state of affairs.  They’re often genuinely surprised that large numbers of employees are disengaged, off-message, and mistrustful, too – of senior management in particular.

What they often fail to see, though, is that they’ve lost sight of some of the critical things that they, as leaders, should have been doing, and we can break these down into three categories:

1. Getting Your Talk Straight

As a leader, manager and role model, what do you stand for?  What do other people need and expect from you?

Any leader can trot out clichés about the importance of customers, diversity, respect for one another, or getting it right first time. But to lead with conviction we need to be very clear in our own mind about what these things mean to us, exactly why they’re so important, and how we intend to make sure they become manifested within the business.

Without this clarity, it becomes very difficult to steer a steady course through hectic days, weeks, months and years of competing demands. But if we’re clear about our priorities and why they’re important, we stand a much better chance of making decisions that support those priorities. Not only that, we also have an internal blueprint for articulating these things to our teams – and we need to do that day in and day out.

Communication is an art in itself, but nothing undermines your message more than failure to back it up with visible, consistent action. Fail that one and it’s not just your competence that people may start to question – your sincerity and integrity could fall by the wayside, too.

Those of us who were working in the mid-1980s will remember the mass-redundancy programmes that were commonplace, as major corporations sought to downsize and restructure. Fearful of soon-to-be-laid-off staff sabotaging systems or taking vital information with them, many companies resorted to instant dismissal of key personnel, even though none was in any way guilty of misconduct. I was working for American Express at the time, and a good number of our employees went to lunch one day, only to find on coming back to work that their security passes had been cancelled and that their names were on a redundancy list. Escorted to their desks, their belongings were put into a bin liner and they were seen off the premises immediately.

It’s hard to imagine now that this could happen, let alone be reconciled with the Values statements that were drilled into us on a regular basis. Fast-forward 10 years and Amex’s redundancy programmes were handled much more sensitively, and with an integrity that most companies would be proud to put their name to. Lessons had clearly been learned, and perhaps more tellingly, senior managers were much more emotionally intelligent than in years gone by.

How many things do we do in a working day that signal our intent, and demonstrate our level of integrity to a watchful staff? Dozens, at the very least, and often small, barely-thought-about things that we do almost on autopilot.

NOT WINNING ANY PRIZES…

The list could go on. However we walk our talk, people will notice – for good or for bad.

And, as with communication, two of the golden keys to success are repetition and consistency. As American writer, historian and philosopher Will Durrant said (paraphrasing Aristotle) – “We are what we repeatedly do. Excellence, then, is not an act, but a habit“. And if it’s to become a habit, we probably need a support structure in place to help us along.

Many of the points we’ve listed above relate to use of personal time, and in ‘The 7 Habits of Highly Effective People‘, Stephen Covey gave a great analysis of why so many of us struggle to use our time effectively at work. Apart from the obvious pressures this places on us as individuals, there’s often another major casualty when we focus on the wrong things, and that’s our integrity – or at least people’s perception of our integrity.

If we’re to keep the ‘say – do’ gap to a minimum, then we have to find time to do the things which, by our own definition, really matter. So often, leaders get caught up in what Covey called Quadrant 1 activities – the “important and urgent” issues that derail us from our best-laid plans and good intentions. Add to those a liberal sprinkling of Quadrant 3 and 4 activities, and we can easily find ourselves short of time to do the things we so often know in our minds that we should be doing. 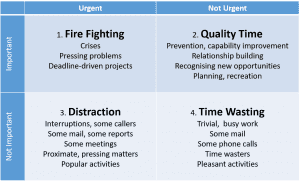 His point – and it’s a very good one – is that leaders must invest ample time in activities that enable their teams to work effectively, rather than on things that they themselves consider urgent, important, or just plain desirable. Here’s a few of our bankable strategies:

To sum up, then. In one sense, you either have integrity or you don’t, and this article is unlikely to be of much use to those who are intent on fleecing customers and exploiting their workforce. But the ‘say – do’ gap is as much of a challenge as it ever was to perfectly well-intentioned leaders, and the sad fact is that their integrity is taking a hit because of it.

To turn that around, leaders must have real clarity of purpose – an almost tangible, personal connection with the things that matter most. Armed with that clarity of purpose, it’s essential that they follow through by engaging in habitual, consistent action that demonstrates a total commitment to making those things part and parcel of the culture of the organisation.

No-one expects their leaders to be perfect, or to have all the answers, but employees, customers and shareholders have every right to expect that their interests are respected, and looked after with the utmost care. Tremendous results can be achieved when employees are highly engaged in what they do, and no factor is more important in bringing that about than the integrity of the leadership team – top to bottom.

“Somebody once said that in looking for people to hire, you look for three qualities: integrity, intelligence, and energy. And if you don’t have the first, the other two will kill you.”
– Warren Buffett

Read the ENGAGE OR DIE! Part 3 – Let them be heard!

Read up on employee engagement, behavioural type and change, listening, opposite type, the chemistry of communication, emotional inteligence and the values gap

Why not view our solutions on teamwork today?

Why your team should be setting goals

Leadership and teamwork. They aren’t two different issues, they are two veins of one interconnected system which supports the profitability …