Regarded by many as the father of Western (and some say Islamic) medicine. Lived on the island of Kos (Cos) and his work and teachings gave rise to a body of medicine known as the Hippocratic school of medicine. No examples of his written work have been reliably identified, but many are attributed to him – more likely that they are the work of his followers. Taught at the Asklepeio on Kos, a school of medicine named after the Greek god Aesculapius, son of Apollo and protector of health and medicine. The Hippocratic Oath is named after Hippocrates and may have been written by him or one of his students. It pertains to the ethical practice of medicine and is still taken by students in many medical schools.

According to writings about Hippocrates (his first known biographer was Soranus of Ephesus,a 2nd century gynaecologist, pictured left) he was the first Western physician to view the body as a whole in medical terms and to attempt to define a unifying system of medicine. The Greeks regarded it as taboo to dissect the body, and consequently Hippocrates followed a less invasive path by focusing on general diagnosis and prognosis, seeking to allow his patients to rest, be well-nourished and clean, so that their bodies could have the greatest chance of healing themselves.

Central to Hippocrates’ views was that human beings consisted of a soul and a body and that illness resulted not from the displeasure of the gods, or other supernatural causes, but from an imbalance (dyscrasia – bad mixture) of bodily fluids which were naturally equal in proportion (pepsis) and which had to be restored to balance (eucrasia – wellness, balance) in order for a person to be free from illness. Eating the wrong foods, for example, could result in unsuitable residues accumulating in the body, where they gave off vapours that could make people unwell.

The four fluids were subsequently referred to as the Four Humours (from the Latin “humor”, meaning “fluid”) but it is not clear when and by whom. Galen (Greek physician, AD 129 – 216, pictured right) revered Hippocrates and developed many of his teachings, ultimately attempting to devise a comprehensive typology of temperament in his dissertation Die Temperamentis in which he speculated on physiological reasons for different behaviours in humans. It is logical that when Galen moved to Rome and formulated the notion of the Four Temperaments, he would have translated his teachings into Latin.

Sanguine Indicates the personality of an individual with the temperament of blood (which was believed to be produced in the liver), the season of spring (wet and hot), and the element of air. A person who is sanguine is generally optimistic, cheerful, even-tempered, confident, rational, popular, and fun-loving. He or she can be daydreamy to the point of not accomplishing anything and impulsive, acting on whims in an unpredictable fashion. Sanguines usually have a lot of energy, but have a problem finding a way to direct the energy. This also describes the manic phase of a bipolar disorder.

Choleric corresponds to the fluid of yellow bile (yellowy-green bile is present in the gallbladder), the season of summer (dry and hot), and the element of fire. A person who is choleric is a doer and a leader. They have a lot of ambition, energy and drive, and try to instil it in others, but can dominate people of other temperaments, especially phlegmatic types. Many great charismatic, military and political figures were cholerics. On the negative side, they are easily angered or bad tempered. In folk medicine, a baby referred to as “colic” is one who cries frequently and seems to be constantly angry. This is an adaptation of “choleric,” although no-one now would attribute the condition to bile. Similarly, a person described as “bilious” is meanspirited, suspicious, and angry. This, again, is an adaptation of the old humour theory “choleric.” The disease Cholera gained its name from choler (bile).

Melancholic is the personality of an indivdual characterized by black bile: hence (Greek melas, “black” + khole, “bile”). There is no bodily fluid corresponding to black to black bile. However, the medulla of the adrenal glands decomposes very rapidly after death, and it is possible that this product is the mythical “black bile”. A person who was a thoughtful ponderer had a melancholic disposition.Often very kind and considerate, melancholics can be highly creative – as in poets and artists – but also can become overly obsessed by the tragedy and cruelty in the world, thus becoming depressed. It also indicates the season of autumn (dry and cold) and the element of earth. A melancholic is often a perfectionist, being very particular about what they want and how they want it. This often results in being dissatisfied with one’s own artistic or creative works, always pointing out to themselves what could and should be improved. This temperament describes the depressed phase of a bipolar disorder.

A phlegmatic (lungs) person is calm and unemotional. Phlegmatic means pertaining to phlegm and corresponds to the season of winter (wet and cold), and connotes the element of water. While phlegmatics are generally self-content and kind, their shy personality can often inhibit enthusiasm in others and make themselves lazy and resistant to change. They are very consistent, relaxed, and observant, making them good administrators and diplomats. Like the sanguine personality, the phlegmatic has many friends. But the phlegmatic is more reliable and compassionate; these characteristics typically make the phlegmatic a more dependable friend.

The four humors theory was to become a prevalent medical theory for over a millennium after Galen’s death. The theory experienced widespread popularity throughout the Middle Ages and was eventually termed humorism (also humoralism). Humoral practitioners actively used theory to explain many illnesses of the time. Use of various remedies became commonplace, especially when a person was considered to have too much of a particular fluid. For example, blood letting from veins was performed when certain conditions were reported.

By the 18th Century medicine was advancing rapidly. The discoveries of the functions of the circulatory, respiratory and digestive systems served to discount the four humors theory as a realistic practice of medicine. However, it remained important in terms of designating personality. Swiss physiognomist Johann Kaspar Lavater used the four humors to advance four specific persona types as dictated by their respective facial structures, expressions and colourations. Lavater also assigned certain characteristics, such as jollity, generosity and kindness to some types, while brooding, introspection and contemplation were assigned to others. He referred to the four temperaments as the sanguine, choleric, melancholic and phlegmatic, preserving etymology of these terms having their origins in antiquity.

German philosopher Immanuel Kant popularized these ideas by organizing the constructs along two axes: “feelings” and “activity”. He also summed up the four types in his writings. For the sanguine type he noted:

“…the sanguine person is carefree and full of hope; attributes great importance to whatever he may be dealing with at the moment, but may have forgotten about it the next. He means to keep his promises but fails to do so because he never considered deeply enough beforehand whether he would be able to keep them. He is good natured enough to help others but is a bad debtor and constantly asks for time to pay. He is very sociable, given to pranks, contented, does not take anything very seriously and has many, many friends. He is not vicious but difficult to convert from his sins. He may repent but this contrition (which never becomes a feeling of guilt) is soon forgotten. He is easily fatigued and bored by work but is constantly engaged in mere games — these carry with them constant change, and persistence is not his forte.”

The late 19th/early 20th century physiologist Wilhelm Wundt (right) expounded on the theory further in 1879. He was the first person to separate personality from human body functions. Further, he theorized that temperaments could not simply be limited to the bodily fluids. He believed that no individual was completely of one temperament; rather that everyone typically has varying proportions of two or more. He believed that all four temperaments were basic dimensions of the human personality and that the temperaments fell along axes of “changeability” and “emotionality”.

This table offers a timeline of the main contributors and their theories.  We have overlaid the humors with the Discovery colour energies – however each model has its own variation. 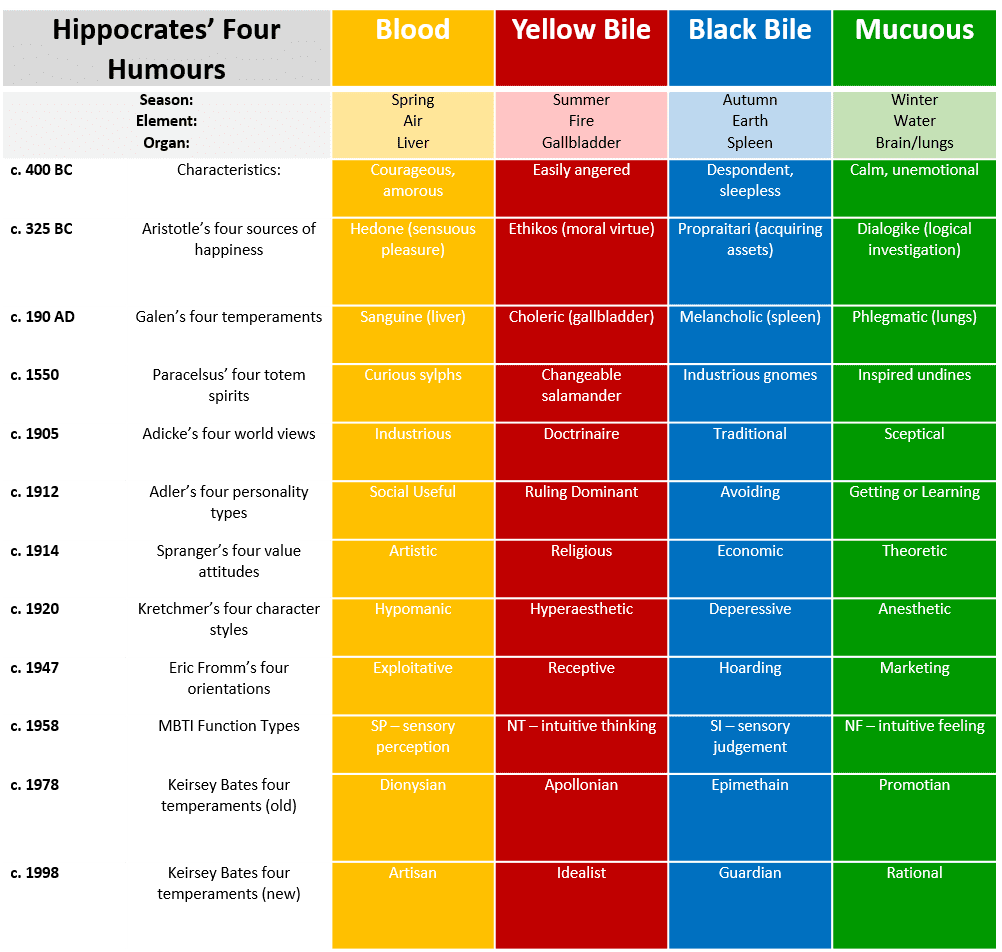